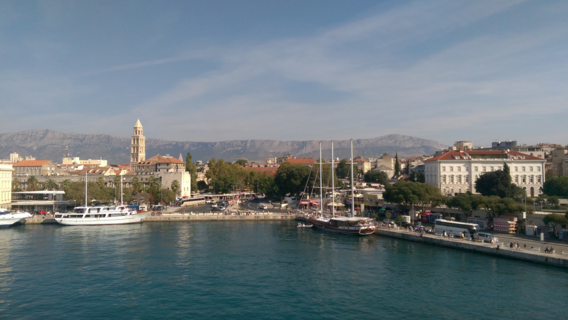 Message:Thanks G/Man for a terrific commentary on our most recent tour. I would completely echo your sentiments on the work done by Pykie in getting us all safely out and back. Roll on the next one!

Regular tourists amongst The Walnut Taverners have long realized that the measure of a successful tour is not dependant on results.


The success of a Walnuts tour is defined by the friendships made, and the friendships renewed. The trip to Croatia was no different. Some were on their first tour, some had been on every tour, but all nineteen tourists would happily sit beside, share a drink or room with anyone else in the group.


The time spent between Split and Vis produced a number of off pitch highlights, not to mention plenty of opportunity for late night hi-jinks. The Radisson in Split provided elegance, comfort, and facilities to relax and unwind.  The Hotel Issa in Vis had a leaking roof, no windows and an insight into life in Communist Eastern Europe and while there were some great evenings in The Bejbi bar and other establishments along the shore in Vis, and some long nights around the various hostelries around the old town of Split the highlight


(from any perspective - food, drink or social) was the night in  Roki's vineyard after our first game. Dining on slow cooked stews, cooked under traditional metal domes,  and accompanied  by Roki's own wines, both teams had a memorable night getting to know each other off the field.


On the playing field, the Walnut Taverners ethos of inclusion and equality  meant that everyone got to bat and everyone who wanted to bowl got to bowl. That egalitarian contribution from everyone is another great success measure for any Walnut's trip and led to a range of playing highlights, including great innings from Sean and Eric, a super bowling spell from Tom Donoghue, a smart catch from Henry and a well taken four by Gerry.


Our first match was a 35 over game. We won the toss and batted first.  Trevor and Ciaran opened  and were ticking along nicely when Trevor was unluckily out ending their partnership on 15. A devastating bowling spell by a partnership of Madic and Istok ripped through our top and middle order and we were precariously placed at 56/8. A strong performance by the tail saw us finish on 97 all out from 32 overs. After a fantastic lunch in Roki's we returned to the field. A couple of early wickets applied some pressure and our hosts were 4/2. They steadied the ship and we did not get another breakthrough until the tenth over. Two wickets for Tom Donoghue brought them to 48/4. We continued to chip away  with wickets but could not prevent them from accumulating runs and they chased down our total in the 21st over, finishing on 98/7. They had a few lucky escapes along the way and another wicket early on would have made it a very interesting finish but we have no complaints and were beaten by the better team.

Our second match was a 20/20 game. We won the toss and batted first.  Sean McGinn and Eric Rankin  put on one of the all-time great Walnuts opening partnerships scoring 80 together before we lost our first wicket. That was the bulk of our runs as again Istok proved to be our nemesis taking a couple of our wickets and halting our momentum. We reached the end of our 20 overs on 104/3.


Some swashbuckling batting in response from Lenko, Istok and Damir saw Hoste CC  chase down our total in the 16th over.  Our second game was followed by our traditional Tour Court - a number of punitive punishments were handed down, ably presided over by Judge Markham.


Cricket is a game that can be described, and defined, purely by statistics although there are also a number of data points related to off-field activities that can also tell a compelling story about the trip:


Number of "accidental " trips to the ladies convenience: 1


Number of on-field fainting spells due to hot flushes: 1


Number of cucumber, celery and apple juices consumed on a night out: 1


Number of matches we might have won  if more people had drank cucumber, celery and apple juices on a night out: Unknown


A big thanks to Steven and all involved in William Hoste CC for playing both games in the right spirit, and giving us two really enjoyable matches and a Huge thanks to Roki for being such a fantastic host.


As always it is a testament to the dedication, hard work and organisation of Philip Whelan that these tours are so successful.


Particularly so in the case of this trip that involved planes, coaches, boats and 3 separate hotel check ins. Philip is ably supported by Sean McGinn, his field lieutenant - The Paulie Walnuts to Philip's Tony Soprano.